The source of Kambo used by the IAKP comes from the original Matses tribe where the frog is treated very well. It is believed by the matses tribe that if the frog is harmed it angers the animal spirit that is so closely associated with kambo.

The Kambo frogs are passive and allow themselves to be picked up. They are are unafraid of humans despite being harvested and once called from the tree can be seen crawling up the legs of humans.

They are carefully tied by each leg with string, or ties made from plant matter. It is in not painful for the frog in anyway. The frog is naturally covers in the secretion which is gently rubbed off the skin. Sometimes the Matses rub the toe of the frog to produce more secretion. The frog is then released to continue living a healthy life in the jungle. It is not damaged in any way. 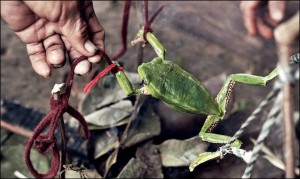 Only the first layer of secretion is ever taken from the Kambo frog leaving it with some protection should it become attacked. It is considered that this source is ethically harvested and sustainable because the frog can be reproduce easily.

In the above statement, I have described how original matses tribesman harvest Kambo frogs. There are a group of outcast Matses that have been exiled from the main tribe that do abuse the frogs by sticking metal sticks in the nose of the frogs to obtain more secretion. There are also tribes that blow smoke at the frog to antagonise and cause it to produce more secretion. The higher the commercial value of Kambo comes, the more untrained people are involved in the harvesting of Kambo and they only concerned with getting the highest yield from the frog leaving it defenceless against predators.

IAKP practitioners do not agree or endorse this approach and choose to pay more for Kambo than to exploit the frogs in this way.

Enter your email below

Want to join the discussion?
Feel free to contribute!

"I was lucky to have the opportunity to experience Kambo. I felt safe and trusting to be led by Rakendra through this deep cleansing process. By allowing the Kambo to move through my body I sensed a connection with the source of Kambo: the Amazonian frog and its people. The extended purging, that is triggered by Kambo, resulted for me in a great sense of lightness, renewed energy and a positive vision about life. A powerfull detox and a precious stepping stone on my healing journey." -Prem Afke' - Newhaven
“I went through some emotional and health issues earlier in the year and when I heard about the kambo at first I thought there was no way it would be something I would do. But as I have been looking for things to help heal me and to get better I thought I would give it a try. The experience was not easy but Rakendra gave me a lot of support. The Kambo helped me get rid of some emotional things I have been carrying around for a while and physically gave me a boost and so much energy” Dane - Ontario
"After a pretty life changing diagnosis, I found myself invited via a friend to try frog medicine. Little did I know what an amazing journey I was to take every step of the way I was supported and held by Raks. The Frog was really a game changer for me I felt uplifted yet so very grounded with much more energy, determination , and a sense of fearlessness that stood me in good stead for the road that’s was to come.
I can absolutely and wholeheartedly recommend the Frog and Rakendra.
I will always be thankful to have met such a generous , sincere and knowledgeable keeper of such a power medicine that is the frog"
Karen East sussex…

I wanted to say thank you and your wife for the sessions you did in Chiang Mai. The Kambo has helped me so much it is incredible. The pain in my joints is gone, I see super clearly (I really believe the trees have become greener :)). I wake up energized, don’t feel anything of my burnoutand depression anymore. Thank you so much

​Enter your email below